Climate Change in the American Mind 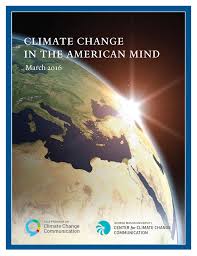 The latest survey from George Mason University’s Center for Climate Communication reveals that the number of Americans “very worried” about global warming has reached a record high since first measured in 2008.

A majority of Americans (63%) say they are “very” or “somewhat” worried about the issue. Likewise, Americans increasingly view global warming as a threat. Since Spring 2015, more Americans think it will harm them personally, their own family, people in the U.S., people in developing countries, and future generations.

You can read the full survey report here.

Virginia Commonwealth University (VCU) hosted the Energy and Sustainability Conference in January 2013. The two-day event was organized by Virginia Sustainable Building Network and James River Green Building Council. More than 800 attendees heard national leaders across business and institutional market sectors discuss how sustainability is changing their organizations and how they’re adapting and leveraging sustainability to enhance their business results.

These Institutional Building case studies from the SBRD/VSBN archives focus on green building projects in our region.

VSBN organized the February 2004 Greening the Hospitality Industry Conference, held in Warrenton, Virginia. This two-day event included case studies, updates on new Green hospitality industry guidelines, and “hands-on” workshops on “Greening your Facility” and “How to Plan a Green Meeting.”

Virginia Beach civil engineers are working to get ahead of flooding and sea level rise risks with advanced modeling capability. ... See MoreSee Less

From bush fires to terrorism: how communities become resilient

The Union Hill community is highlighted in this article on environmental justice and climate solutions. ... See MoreSee Less

Earlier this month, federal judges handed the residents of Union Hill, Virginia, a big win when they...
View on Facebook
·Share