A team of more than 300 experts guided by a 60-member Federal Advisory Committee produced the report, which was extensively reviewed by the public and experts, including federal agencies and a panel of the National Academy of Sciences. Volume II, Climate Change Impacts, Risks, and Adaptation in the United States (NCA4 Vol. II), will be published in early 2018.

The U.S. Global Change Research Program (USGCRP) was mandated by Congress in the Global Change Research Act (GCRA) of 1990. Its mandate is to develop and coordinate “a comprehensive and integrated United States research program which will assist the Nation and the world to understand, assess, predict, and respond to human-induced and natural processes of global change.” 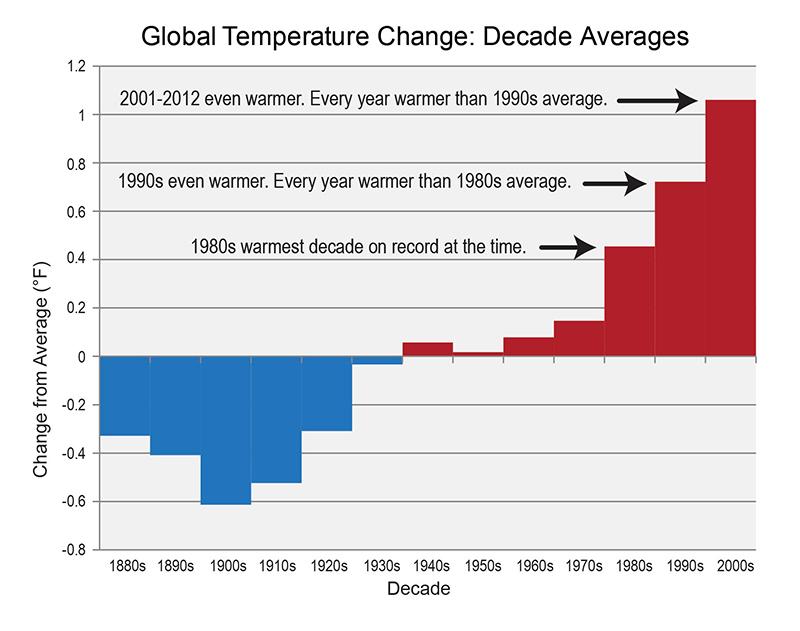 The last five decades have seen a progressive rise in the Earth’s average surface temperature. Bars show the difference between each decade’s average temperature and the overall average for 1901–2000. (Figure source: NOAA NCDC).

Extreme heat will affect health, energy, agriculture, and more.Every four years a new report, developed through extensive input from the latest scientific research, is published and submitted to the President and Congress and to the public. This report assesses the effects of global climate change, both human-induced and natural, on the natural environment, agriculture, energy production and use, land and water resources, transportation, human health and welfare, human social systems, and biological diversity.

A summary of the findings include the following:

Read the complete report at http://www.globalchange.gov/nca4.

Electrify EverythingClean up the gridThese two bullet items make up a core mantra for those concerne...
View on Facebook
·Share

Don't miss the latest information on financing the green and clean economy this Thursday, January 23rd at the Leaders in Energy Event in Arlington. ... See MoreSee Less

More than ever, innovative financing solutions are needed for green energy and sustainability projec...
View on Facebook
·Share

"Resilient Thinking" for Farms and Communities

Rising awareness and impact from storms, fires, and floods might be the reasons for a shift toward major alarm and concern about climate change, as seen in GMU new survey. ... See MoreSee Less

For the first time, the Alarmed are now the largest of Global Warming’s Six Americas