Resilient Virginia is a nonprofit formed in 1995 to help raise awareness of ways communities across the Commonwealth may need to adapt in response to any number of calamities that may come our way due to climate change. Heatwaves. Drought. Extreme rain. Invasive species.

Seven years ago, the organization changed its name from the Virginia Sustainable Building Network in order to put a sharper focus on the topic. This week they’re holding an online gathering they’re calling the Resilient Recovery Conference. Governor Ralph Northam kicked off the event this morning.

“Over the past sixteen months, the COVID-19 pandemic has highlighted the importance of comprehensive resiliency plans that address health, social, and economic concerns together with the increasing and significant impacts of climate change,” Northam said.

Northam said one of the top priorities in his one four-year term has been climate change. Individual initiatives include the Coastal Adaptation and Resilience Master Plan and the Community Flood Preparedness Fund. Virginia has joined the Regional Greenhouse Gas Initiative.

“Last year, I signed the Virginia Clean Economy Act into law,” Northam said. “Virginia is now one of just a few states and the first in the south to adopt a 100 percent clean electricity standard,” Northam said.

Northam signed Executive Order 24 in November 2018 to direct the administration to prepare for sea-level rise and other natural hazards. (read the order)

That order cites an earlier report from the United Nations’ Intergovernmental Panel on Climate Change, one that is now outdated because the IPCC entity released another one earlier this month that suggests change is inevitable to the weather system we have known throughout our lives.  We’ll hear that report being referenced throughout this show. (IPCC report)

“As these types of events become more frequent and more intense, so do the threats to public health and safety, our environment, and our economic well-being, including our courts, military installations, infrastructure, tourism, assets, farms, and forests,” Northam said.

Just before the event began, Northam’s press office announced that Dominion Energy  will lease space from the Port of Virginia at the Portsmouth Marine Terminal as a staging area for wind turbines that will be erected 27 miles off of the coast of Virginia Beach. (press release)

Krystal Laymon is the deputy director for climate resilience of the White House Council on Environmental Quality. She repeated the impacts of predicted climate change are being felt now.

“Over the past few years, the U.S. has seen the number of weather and climate disasters with losses exceeding $1 billion sky-rocket,” Laymon said. “From the years 2000 to 2009, there was an average of six disasters a year, each totaling a billion dollars. Last year alone, the United States faced 22 such events with a cumulative price tag in excess of $100 billion.”

Laymon said investment in mitigation before disaster strikes can save money, but acting now can also help to save lives. President Biden signed Executive Order 14,008 in February with the title “Tackling the Climate Crisis Home and Abroad.” (read the order)

“Every agency must be a climate change agency,” Laymon said. “A whole of government response ensures that the federal government presents a unified front on climate and considers climate resilience with every decision.”

“It’s important to recognize that while coastal areas make up less than ten percent of the land area of the United States, they’re home to nearly 42 percent of the population,” Laymon said.

This week, volunteers across the country including Charlottesville are measuring the urban heat island effect. Laymon said extreme heat is another concern.

Laymon also mentioned other initiatives such as Justice40, a program that seeks to ensure that 40 percent of federal investment in mitigation goes to disadvantaged communities. (read more)

But that’s the future. Where are things now?

We would like to thank Sean Tubbs for his coverage of our 2021 Resilient Virginia Conference. You can listen to his podcast and read the full article here. 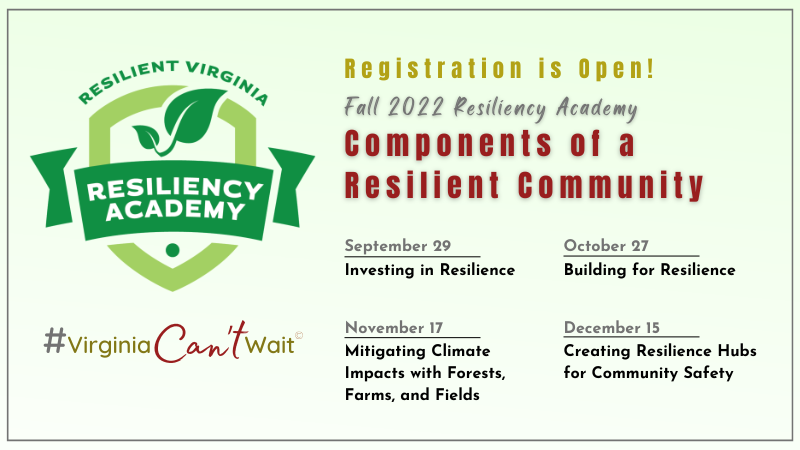